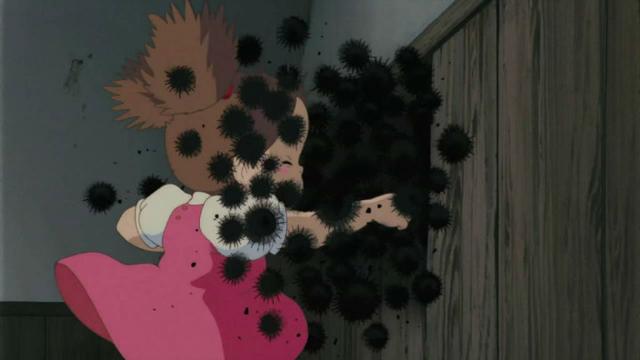 You might have noticed that most of my monsters are Ghibli-esque. That’s on purpose. I think that sort of monster suits OSR play very well and is highly adaptable to styles and ages of play. This one is much more directly inspired.

Black soots usually only occur in groups of 3d6+10 or more.

Black soots are sprites. The average black soot is the size of a lemon. They’re fuzzy, hairy balls with stick-like limbs that extend, retract, and hold objects, eyes, and mouths that are only noticeable when they’re expressing emotion or eating. They float in the air in the general direction they want to go in, but cannot float with precision. A black soot can lift about 1/4th the weight that an average adult human can each and can push and pull things just as easily. They cannot speak any language but their own which sounds like low squeaks.

At the moment at which great physical harm might occur, they become a spot of black, powdery soot until they feel safe, often fooling their would-be killer into believing they’ve successfully killed them. (Do this when a PC successfully removes their HP.) They can be alchemically destroyed or used in the creation of magical objects, potions, and whatnot. This ability lends them a certain lack of fear - they rarely run from danger, though they will flee hard work if they don’t see an opportunity to not do it.

They’re stupid. They will obey simple commands if intimidated or impressed but like small, mostly harmless bits of mischief when left to their own devices. Their emotions show very easily.

Details: lemon-sized, fuzzy, hairy, stick-limbs that extend and retract, can lift 1/4th the weight that a human can, no human language, changes to soot powder instead of death

Effect of consuming: roll 1d6. 1-2: Only works once. Increase STR by 1. Your clothes become sooty every 12 hours. 6: Permanent asthma. -1 Inventory Slot when near flowering plants and for 1 hour following intense exertion.